Jean-Jacques Pont explains us the adventure of the Florance shipyard and its evolution from the monotype of Chatou in strip planking to the modern dinghy in CP-Epoxy.

BI : Can you explain us on what occasion the Chantier Naval Florance was created?

J-J Bridge : I created Florance Shipyard 10 years ago, in June 2006. The initial objective was to relaunch the monotype of Chatou, a series designed for the Seine in 1901 by François Texier. I made the first one using the strip-planking method, then made a mould out of it. Unfortunately, if the boat had a real success of esteem, none was sold.

BI : How do you explain that?

J-J Bridge : In 2007, I think we were coming to the end of a decade in which the neo-classical was very popular. Purchasing was changing. Those who could afford such a boat preferred something else, but bigger.

BI : So what was the rest of the story?

J-J Bridge : I started the construction of a 12 m² Le Havre, still strip-planning, but this technique is difficult to sell in France, given the many hours of manpower required. In addition, the crisis of 2008 has invited itself...

In parallel with the new construction, the initial goal of the site, I developed the repair activity. These are mainly small wooden units such as beluga whales or caravels. Currently it represents 80% of the activity, even if I intend to reverse the trend.

J-J Bridge : Indeed, in 2014, I launch the Patapon, the first CP-Epoxy dinghy of the yard, designed with Jean-Marc Nourry and his company Viteo for the hull. The glued sewing technique makes it possible to build quickly with a good solidity. In addition, the series production sites gave a good image of plywood. If it works for a travel boat, it's also good for a dinghy.

BI : Today you have two models, sold in kit or bar in hand. What are the proportions?

BI : What are the future projects?

J-J Bridge : Continue existing boats, but also launch a small model on the Optimist program for the Grand Pavois. A 5.5m solitaire and a 4.5m double, still in CP Epoxy are in the cards for the end of the year. As I am alone at the site, the dates will also depend on the projects.

As for navigation, we should find the 5 P4s built at the rendezvous of the Erdre. A beautiful showcase for the construction site.


Epoxy Plywood
Also to be read on BoatIndustry.com

Beboat, a small and successful project 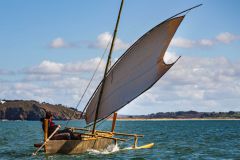 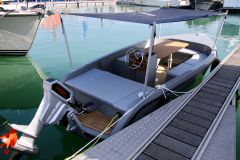 Call for a revival of pleasure boating with electric propulsion
Newsletter BoatIndustry.com
Receive all the latest news every week
Tava'é, how to recycle an old project...
Reports Shipyard
All feature stories Shipyard
Special Edition
Boatindustry.com