The TS 42, with its sporty, technological positioning and numerous options, is the flagship model of Marsaudon Composites. An update on a business success that should make small businesses.

The TS 42 catamaran is the result of a partnership between naval architect Christophe Barreau and the Marsaudon Composites shipyard. The big brother TS 52, whose two units were built for the architect himself and Francis Joyon, attracted many enthusiasts. The demand was then felt for a 40-foot boat that follows the same philosophy as a fast, light and simple sailboat.

The TS 42 takes up the essential elements: an open saloon and uncluttered interiors. A carbon construction allows a displacement of only 5.8T for 13 meters long.

Due to its refined manufacturing method, the boat, whose basic price excluding option is 426,000 euros inclusive of tax, is aimed at customers who wish to customize their catamaran. Each unit can therefore be adapted according to a richly detailed option catalogue that ranges from upholstery selection to kevlar reinforcements and oil heating.

The second unit built was intended for a shipowner with reduced mobility. The entire nacelle has been adapted to allow the owner to carry out all the manoeuvres. Thus, a circulation for the chair has been provided in front of the basket. This catamaran earned Marsaudon Composites the Innovation Trophy of the Morbihan Chamber of Commerce in 2014.

Launched at the end of 2014, 10 TS42s have already been sold. The 7th unit is under construction in the Marsaudon Composites naves. For the time being, the customer base remains European, although there are prospects in North America.

The boat is available for rent at Régis Guillemot in the West Indies, many buyers try the catamaran in the islands before buying. This possibility is certainly a commercial asset for the site.

In response to customer demand with a longer travel program, Marsaudon Composites is currently working with Christophe Barreau on a TS 48. There is no doubt that this new model will have to be followed carefully. 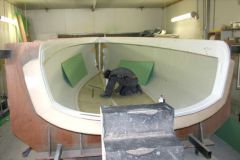 Ikone 6.50, a technological step for the Concarneau site 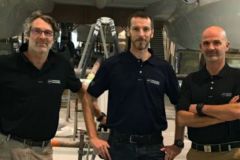 Purchase of Marsaudon Composites: "Sam takes the helm, but will help us navigate" 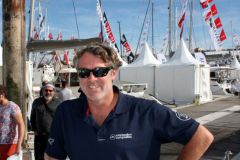 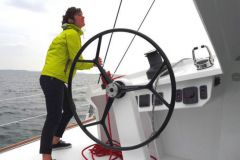 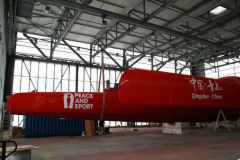