Things are happening in the boating industry! A look back at the latest news from yachting professionals. The news briefs of January 14, 2020.

Seawear specialist Guy Cotten has been selected for the "Made in France" exhibition. The brand was chosen by the Finistère department to represent it at this event dedicated to technical know-how and production in France. The famous yellow raincoat or Rosbras jacket will be exhibited at the Elysée Palace on 18 and 19 January 2020.

The Bénéteau Group strengthens its presence in Asia

The French yachting leader confirms its ambitions in South-East Asia. Already a distributor of the Bénéteau Swift Trawler and Prestige brands, the Hong Kong-based company Asia Yachting is strengthening its partnership. It will now represent the boatbuilder in Indonesia, Malaysia, Thailand, Singapore and the Philippines.

The American recreational equipment group Lippert Components has announced the completion of the acquisition of Polyplastic Group BV, a manufacturer of glazing for recreational vehicles and leisure vehicles. A heavyweight in the nautical industry on the other side of the Atlantic, the company is continuing to expand in Europe, following the acquisition of Lewmar in the United Kingdom and Lavet in Italy.

The start-up Sailsense Analytics closed a capital increase of 1.8 million euros. 3.2 million in the company should enable it to continue developing its connected boat and data collection solutions for charter fleets such as Wiziboat and Hermes Yachting.

The recreational equipment distributor ATMB has announced the signing of a partnership with ATI. The company now offers ATI water heaters in its catalogue. 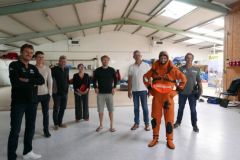