For the 50th edition of the Solitaire Urgo le Figaro 2019, the class has offered itself a brand new support: the Figaro 3. Now equipped with foils, a more complete and technical sailing game, and a more modern hull, the feedback from the skippers on the new boat is very positive. But in order not to reproduce the mistakes that have polluted the last few seasons in the Figaro 2, the class demanded absolutely one-design boats as soon as they left the yard. Visit of the place where the Figaro 3 were born. 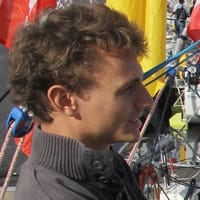 At the end of 2015, Bénéteau launched a study to design a new boat. The specifications are written by the Figaro class, which includes all the owners and skippers. Together they defined the boat in terms of race objectives, cost - the boat should not be more expensive than a Figaro 2 or 150 000 ? - and weight. The idea was to make a lighter boat with the same stability and without ballast - hence the use of foils. A call for tenders was sent, 5 architects were selected. Two of them offered boats equipped with foils. The tilting keel or daggerboards have also been studied, but abandoned for budgetary reasons - a pair of foils already costing ?30,000.

We went to visit the Bénéteau shipyard that produces these new boats. This site, opened in 1992, built racing trimarans for the Jeanneau brand. After a few years, it was rehabilitated for the launch of the Figaro 3. For an investment of 3 million euros, the building was closed in order to create a specific room for infusion where the temperature and hydrometry are controlled: 20°C and 50% humidity.

Within this entity, Marc Vaillier - project manager - has gathered the best skills: motivated young people whom he trained to build a top-of-the-range boat. It was then necessary to advance the coquettish sum of 8 million euros to be able to build the first 50 units. At the last Nautic 2018 in Paris, the owners drew lots for their hull number. The first person to complete their order form was the first to draw their boat number and be delivered after the boat show. The first 50 boats were delivered in 3 weeks.

The workshop located under the Cheviré bridge in Nantes is able to produce a Figaro Bénéteau 3 in 20 days. A boat leaves the factory every 4 days. To keep up with this rate, you need a lot of perfectly calibrated tools. To date, 70 Figaro 3s have left the factory and the single mold should be able to produce about a hundred.

Rigour and precision are essential in order to be able to respect a strict one-design. A drastic quality control is implemented by the site. The quantity of material is carefully monitored and each part is weighed at the exit of the mould. The weight difference between the heaviest and lightest hulls is only 18 kg - on a finished hull of 2920 kg. This difference in weight is compensated by sows distributed between the front and rear.

Minimal differences between each hull

The first 22 hulls were digitally scanned by their owner. A deviation of only three tenths could be measured. For example, a 0.12 degree offset to starboard was found on the "worst" keel. The worst foil position and 5/10th of a millimeter to starboard. Each foil weighs 36.5 kg and there is a 420 g difference between the heaviest and the lightest. The foil tip, once out of its well, falls within a space of less than 10 mm for the 60 boats. In most cases the assembly accuracy is lower than the measurement accuracy.

The shell is made by infusion. For a complete shell, you need 576 pieces of fiberglass fabric. Each piece is digitally cut internally and placed using a template so that each overlap is identical on all boats. To obtain such a result, the technical construction manual is more than 200 pages long.

To optimize weight while complying with ISO standards, specific fabrics have been designed in collaboration with architects and manufacturers to achieve an optimized weight. A diffusing fabric - which helps the migration of the resin in areas where there is a lot of thickness - has even been developed especially for this project. Behind the keel or foils, there are up to 65 thicknesses of fabric. Without this specific diffusing fabric, there would be a risk of remaining dry areas at the heart of the composite.

The keel structure and longitudinal structure are infused at the same time as the hull. The keel bolt fasteners are included in the mold. No drilling through the shell is necessary.

The assembly line consists of 4 stations on which each boat will spend 4 days. On the first of the 4 stations, the partitions are positioned using templates and glued with methacrylate glue. The 3 main partitions also have an additional layer recovery. The hull is moved to the next position after 4 working days. It is positioned thanks to the keel shaft so that the tools of each station are perfectly aligned.

On the last station, the hull is closed by the deck, which is already pre-accessed.

No carbon in this workshop

Thanks to all these measures, the yard ensures a strict one-design of the boats. If a modification has to be made on one of them, it will also have to be applied to the whole fleet. In addition to the rigging problems that were managed by the mast manufacturer, the site was, for example, forced to reinforce the pilot cylinder support when the first 50 units were already delivered. But this rigour allows the skippers to free themselves from suspicions of inequality between the boats and to concentrate on their navigation.