The Blohm + Voss and MB92 yards create a joint venture to exploit the great form of La Ciotat, before its imminent opening. The objective is to accelerate the growth of the yacht refit business.

Shortly after winning SEMIDEP's invitation to tender for the operation of the port of La Ciotat, the German yard Blohm + Voss was bought by its compatriot Lürssen, the transaction having been validated by the competition authorities on 31 October 2016. Since then, the new parent company had announced that the contract for La Ciotat had been reviewed and various hypotheses had been circulated. A joint venture will finally be created with the Catalan shipyard MB 92, based in Barcelona, with which Lürssen already has a rich history of refitting yachts in the Mediterranean.

It is the argument of an accelerated development of the activity on the site of La Ciotat which attracted SEMIDEP and allowed the renegotiation of the contract. Part of the order book supplied by MB92 is likely to be redirected rapidly to Provence, where the projects will benefit from the combined expertise of the two sites. They will also continue to develop the activity of subcontractors in the yachting industry between Marseille and Toulon.

Jean-Yves Saussol, General Manager of SEMIDEP is delighted. "We are very confident in the long-term development potential of Blohm + Voss La Ciotat, as the provision of services to yachts as close as possible to their usual areas of development is an increasingly important market segment in the value chain of our industry. "

The inauguration of La Ciotat, after its modernisation works, is scheduled for 3 April 2017. 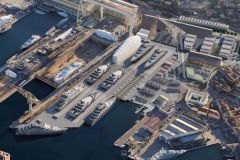 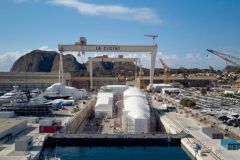