The Fédération des Industries Nautiques takes stock of its mission to assess the damage caused by cyclones Irma and Maria in Saint-Martin. Guillaume Arnauld of the Lions informed BoatIndustry of the measures requested and implemented by FIN.

Guillaume Arnauld des Lions, deputy general delegate of the Fédération des Industries Nautiques, led a mission for the association to assess the consequences of cyclone Irma for the local yachting industry. Conducted in collaboration with METIMER, the structure federating the professionals of the nautical industry of Saint-Martin, it made it possible to draw up an initial assessment:

10 M ? claimed from the State for the sector

The nautical sector achieved a turnover of 95 M  in 2016 and employed 400 full-time equivalent in 68 companies according to a study conducted by METIMER. Faced with the damage affecting an industry that is one of the tourist assets of the island of Saint-Martin, the Fédération des Industries Nautiques is calling for the establishment of a ?10 million credit line in the draft 2018 budget. "Management will surely revert to the interdepartmental delegate for reconstruction, Mr Philippe Gustin. We can imagine several forms of aid still to be discussed, such as interest-free loans or subsidies for the purchase of tools needed to restart the activity. This is a one-off emergency aid to guarantee the survival of businesses that might otherwise disappear in the coming months," explains Guillaume Arnauld of the Lions. 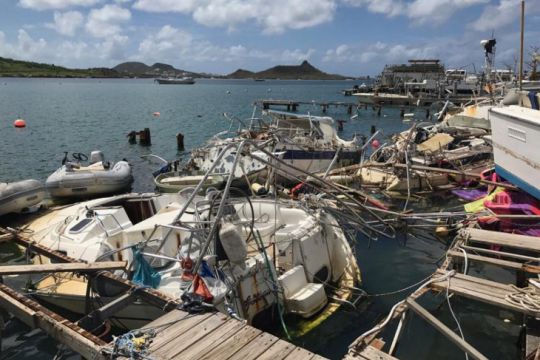 Asked by BoatIndustry about the concrete actions of the FIN, its deputy delegate general specifies the measures implemented and mentions projects under study. "For the time being, FIN is making its legal and social resources available free of charge to all professionals in Sint Maarten, including non-members, in order to support the sector. We are thinking about financial solidarity actions in the nautical sector, but it is still a little early to announce concrete measures."

A real will to rebuild

To those who mention the delay in the reconstruction of the French part of Saint-Martin compared to the other affected areas, Guillaume Arnauld of the Lions retorts:"I was in the Dutch part of Saint-Martin, the situation was no better! He concluded with a positive note. "We were very well received, with over 80 professionals at our meeting, with an impressive willingness to rebuild."

ENDS: "Show the government that the boating industry is responsible."
All the latest news Federations
Environment

Yves Roucher : Disappearance of a figure from the boating world
Newsletter BoatIndustry.com
Receive all the latest news every week
Nicolas Hénard, the frondeur takes over the presidency of the French Sailing Federation
Reports Nautical sector
All feature stories Nautical sector
Special Edition
Boatindustry.com