Cyril Sancereau is a French photographer who studied architecture and graduated from the École des Beaux-Arts in Rennes. He is now specialized in architectural and landscape photography. He has also been organising the Bénéteau Foundation architecture competition for the past six years.

What is the Bénéteau Foundation?

The Foundation was created in 2005 by the Bénéteau Group and is committed to the protection of the environment, the enhancement of the know-how and heritage of yachting, as well as innovation, in the world of boating and leisure housing. Since its creation, it has supported 21 projects, contributed to the creation of a company and organized six architectural competitions.

Can you tell us about the foundation's architectural competition?

How are the themes determined?

Each year, the Foundation determines a theme and a topic that I distribute to schools. Before the subjects were broad, because it was considered that the Foundation should promote innovation and creativity. A lot of work was done on earth architecture projects, a theme that was very much studied in archi's school. But for the past two years, we have decided to refocus the competition on the Bénéteau Group's activities, namely sailing, motoring and leisure housing. Each year, a theme related to one of these areas is selected. In 2017, it was the sailing catamaran, in 2018 the motor catamaran and next year the leisure habitat.

Depending on the theme, we approach Group employees in the field concerned to choose the theme and write the subject. 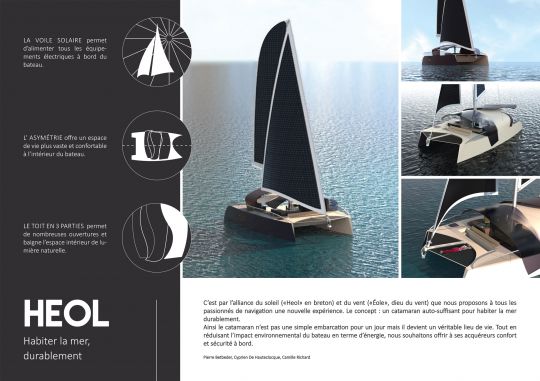 How do students learn about the competition?

The theme of the competition is then distributed to schools of architecture, on specialized sites or via Facebook. Today several schools integrate it into their curriculum. It's part of a school project. The objective is to disseminate as much as possible so that as many students as possible are aware.

Simply register on the Bénéteau Group website in the Contest section. Students have 8 months to present a project, individually or collectively. They are often in groups. We leave them a long time voluntarily, because not all schools have the same schedule.

I then pre-select the files, which I divide into 3 groups. They are then all presented before a jury of professionals, composed of members of the Bénéteau Group, but also of outside personalities such as architects and journalists who will be able to take a different look at the projects.

Since 2017, the previous year's winners are also invited to be members of the jury for the current year. On the one hand to keep the link and on the other hand to have a younger look at these projects that we receive.

How many projects do you receive?

In the nautical field, it's more complicated. Last year, I received 48 projects (for 108 students). The year before, I had received 136 projects. The competition focused on a floating neighbourhood, an area that students are more used to working in schools. We are nevertheless trying to push boat design, to help a sector where schools are not very present. We generally receive between 50 and 150 projects each year.

How to win the contest?

Innovative concepts are rewarded. The purely technical or economic aspect is not the objective. The aim is to find new, innovative and different concepts. It is not a competition of ideas, but a competition of strong concepts. We know that we will not make a prototype behind, but we prefer concepts that could give ideas for the future creation of boats. The concepts still have to exist in theory, but at the sketch stage. We can then imagine working with engineers.

3 winners are selected from the ranking and receive a financial award:

It is financial assistance for their studies. They often have to share it because they compete mostly as a team. They have free choice in the use of their prize. In 2017, we won two first prizes and a second prize. It was exceptional! One team and one individual. The following contest is launched at the awards ceremony.