The Monaco Yacht Show has announced its new products for 2017, in order to attract more superyacht buyers and better serve them.

A 2017 edition filling up the tank

After 27 years of existence, the Monaco Yacht Show is still full. The exhibition remains the annual highlight of the superyacht and megayacht market. The 2017 edition should welcome 590 companies, 87% of 2016 exhibitors having renewed their reservations for this year. 40 superyachts among the 125 presented afloat at Port Hercule must make their first during MYS 2017.

The MYS organization insists on its strategy, launched 4 years ago, which aims to attract more buyers, private or professional. The aim of the exhibition is to create direct contact between exhibitors and a new clientele of end owners. To this end, the organisers are continuing the experience of the Monaco Yacht Summit, launched in 2016, which brings together, on the eve of the opening of the MYS, during workshops, professionals and guests, chosen for their manifest interest in the purchase or management of superyachts. The event, as well as the opening ceremony, are included in the Sapphire Experience programme, a premium service including yacht tours and a concierge offer.

To complement the commercial efforts on the MYS, the organizers also conducted promotional operations for American and British billionaires in New York and London during the month of May 2017.

Improvement of MYS 2017 spaces and services

With the end of the works on the north dock of Port Hercule, the MYS will reinvest this space by installing a marquee on Quai Albert Ier. A new area dedicated to lifestyle, the Starboard, will also take place on the platform. The Car Deck luxury car showcase operation, launched in 2016, will continue in 2017.

Following exhibitors' requests, transport within the MYS 2017 will be improved thanks to better signage and an additional pontoon. 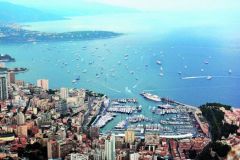 New turnaround in the organisation of the Monaco Yacht Show