One year after the takeover of Le Bihan Voiles by 4 of its employees, we take stock with Damien Le Bihan, manager of the sailmaker. Race, cruising, organization, development...

Can you remind us of the history of the sailmaker Le Bihan?

Damien Le Bihan: The company was founded by my father, Ronan Le Bihan, in 1981. He had already been making his own competition sails since the 1970s, before building the first sailmaker in our garden to make it his profession. Well established in Bénodet, the sailmaker then developed with the creation of a new site every 10 years, in Port La Forêt in 1992 and in Séné in 2000.

You took over the Le Bihan sail shop with 3 partners in November 2015. What were the motivations?

DLB : By retirement age, my father had put the sail shop up for sale. He had no idea then that we would be motivated by recovery. Yet it happened like in an old ad that said"What if the buyer was in your company? I fell into sailmaking when I was little and I wanted, like other sailmaking employees, to keep the business going in the spirit initiated by my father. We therefore joined forces with David Larhant and Franck Paris, the rigging managers of our Port-La-Forêt unit, and Frédérique Boëssé, the administrative and accounting manager, to create a limited liability company. This company bought Voilerie Le Bihan from Ronan Le Bihan to continue the activity.

What are the main areas of activity of Voilerie Le Bihan today?

DLB : The sailmaker, which began by making itself known in the race, is today mainly active in the retrofitting of cruising yachts. We are particularly known for our robust Hydranet sails, a blend of polyester and dyneema, ideal for long-haul boats. We continue to produce racing sails in small niche markets such as the 420, the caravel or the privateer, where we equip nearly half of the fleet.

Besides the sailmaking, 15% of the activity is dedicated to accessories, such as awnings and hoods. This is mainly a retrofit, but we also produce the interior textiles for the Pogo at Structure.

The rigging completes the last quarter of the activity, through the resale of Z Spars products and the Port-La-Forêt cable workshop. 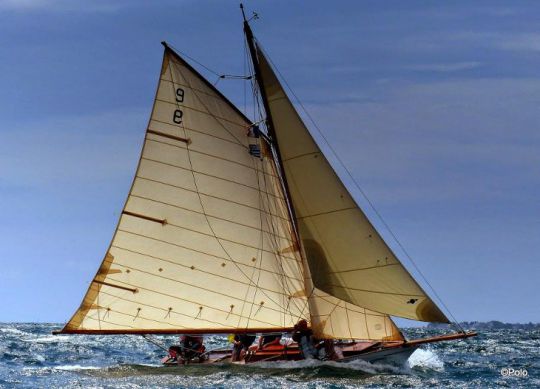 What have you changed in terms of organization in this first year since the takeover?

DLB : With my 3 partners, we have all worked in the company for 5 to 10 years. My father accompanied us for the first 5 months. We have maintained the main elements of the organization, with the sectorization of activities by workshop:

With experience, we work on the ergonomics of the workstation. A new floor was installed this year on the ground floor in Port La Forêt and a new table allows standing work in Bénodet.

What are the future projects for the sailmaker Le Bihan?

DLB : After updating the website, we are creating a showroom in Bénodet for accessories. The medium-term perspective is now to launch a network outside our local anchorage, through partnerships with independent yachts.