Bénéteau posts higher results in the first half of the year

The Bénéteau Group announces an increase in turnover for the first half of 2015-2016, but still in the red. The boat and housing branches are benefiting from the launch of new ranges and the industrial transformation plan.

The trend is positive for all activities compared to the previous year. Group sales and net income are up. Revenues were 11.2% higher than in the first quarter of 2014-2015. Adjusted net income fell by ?3m and remained negative at ?40.3m. As invoicing takes place mainly in the second half of the year, it is classically negative at the beginning of the financial year.

A dynamic boating sector in Europe

At 291,2 M , the turnover of the boat sector increased by 15.9% compared to the first half of the previous year. At constant exchange rates, the increase was +12.5%.

The dynamism of the European market compensated for weak growth and the timidity of the American and Asian markets. It allows a growth forecast at constant exchange rates of over 12% for the nautical activity. It should be noted that a commercial dispute penalized the current operating income of the boats branch. 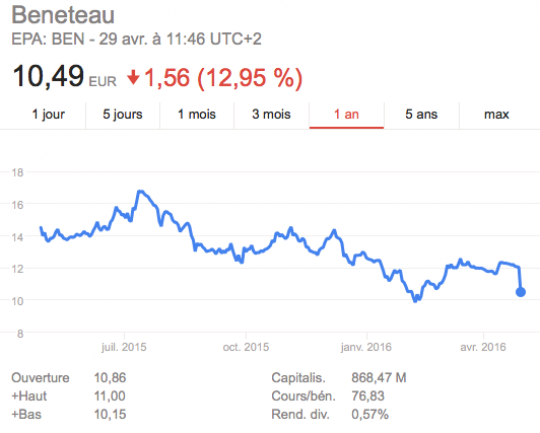 Boat activity growth will be less sustained than expected, with strong regional differences.

The Group's industrial and management investments to improve its competitiveness will entail exceptional costs.

Business should grow strongly for stable current operating income and a significant increase in net income.